A novel written by Kenzaburo Oe, the title of which is "Nip the Buds, Shoot the Kids" named in Japanese "Memushiri-Kouchi", was the first one of his so many long novels. It seems a work developed from "Shiiku" which was his prominent short story in an early age, both of them described a figure of boys cruel and innocent in wartime. In "Shiiku", unripe boys in a village of mountains had remained powerless, but a boy who told that story was finally aware that he had been no longer a child to be protected like a feeble rabbit. In other words, maybe "Shiiku" was a introductory chapter of "Memushiri-Kouchi" which dealt with a matter of fighting against adult absurdity.

A village which had been abandoned because of an epidemic of unknown diseases, it reminds me the same situation which was described in "Shiiku", a village had lost roads to the Town because of a rain long and persistent, then those who had lived there were forced to be confined. However, it was not the precise opinion that both of them were completely identical. In "Memushiri-Kouchi", Oe emphasized Filthy Adulthood which means social injustice, concealed crimes, abusing authority, and these elements contrasted with pure childhood. Opressed children, it was his early literary theme so much important and characteristic. They built a small utopia in an abandoned village without any interference by adults, but the kingdom of children was unable to exist permanently. Adults returned from outside offered children a filthy deal that nobody will expose the truth which had happened in a village. In contrast to most of boys which chose to be obedient, to tell a lie, to conceal the truth, a boy who told a story determined to refuse submission to dirty adults. He would rather have accused them thoroughly, so that he had got to run away from murderous intent with all his might. Oe didn't mention whether a boy had managed to get rid of hatred from selfish adults, maybe it was more significant for a boy to accuse injustice rather than to achieve revenge on adults actually. However, it's not enough for overcoming foul adults to believe in worth of courage, because they have no compassion for children came from a reformatory. The sick buds ought to be nipped, the evil kids ought to be shoot, it's a bloody slogan persisted by adults who pretend to have morality. They merely regarded boys as nasty quarry or else poor livestock to be obedient, accordingly they will not so much as hesitate to slaughter obstructive boys. Accusation had already done, then a fight against filthy adults had better begin soon no matter whether it's possible or not. 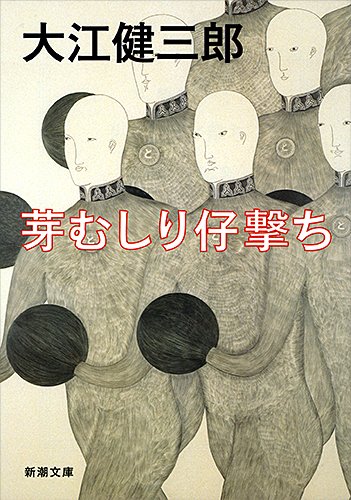 Nip the Buds, Shoot the Kids